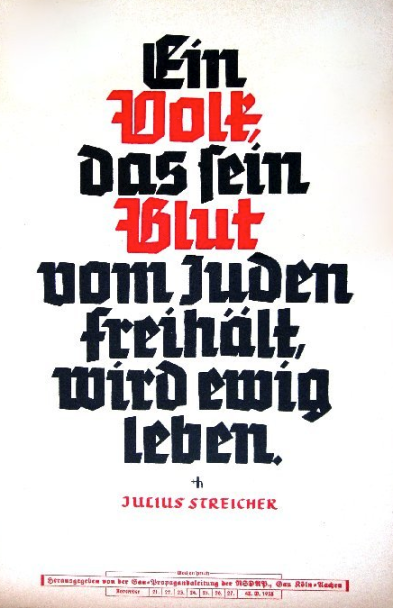 A People that keeps its Blood free of Jews will live forever.   Julius Streicher 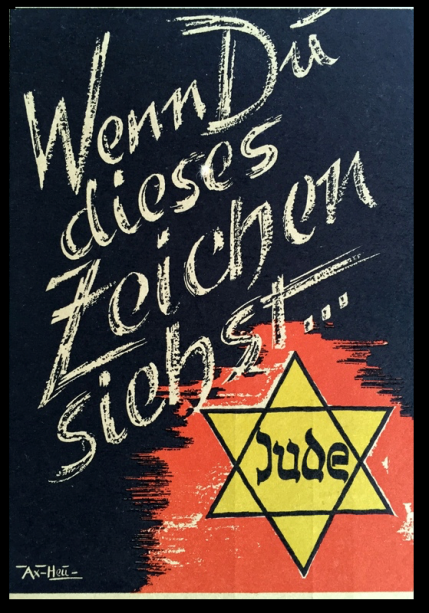 Anti-Jewish laws began taking effect in April 1933, but they could not be consistently enforced without precise rules for who counted as Jewish. The Nuremberg Laws of September 1935 clarified this issue. A special August 1935 edition of the Party’s Westfälischen-Landeszeitung newspaper was devoted exclusively to the Jewish Question, and indicates the atmosphere in Germany at the time.

Each German resident was placed in one of four categories, depending on the number of Jewish grandparents they had:

Accordingly, everyone in Germany had to document the religion and nationality of their grandparents. This family history was recorded on the ‘small ancestry form’ or on the more detailed Ahnenpass. 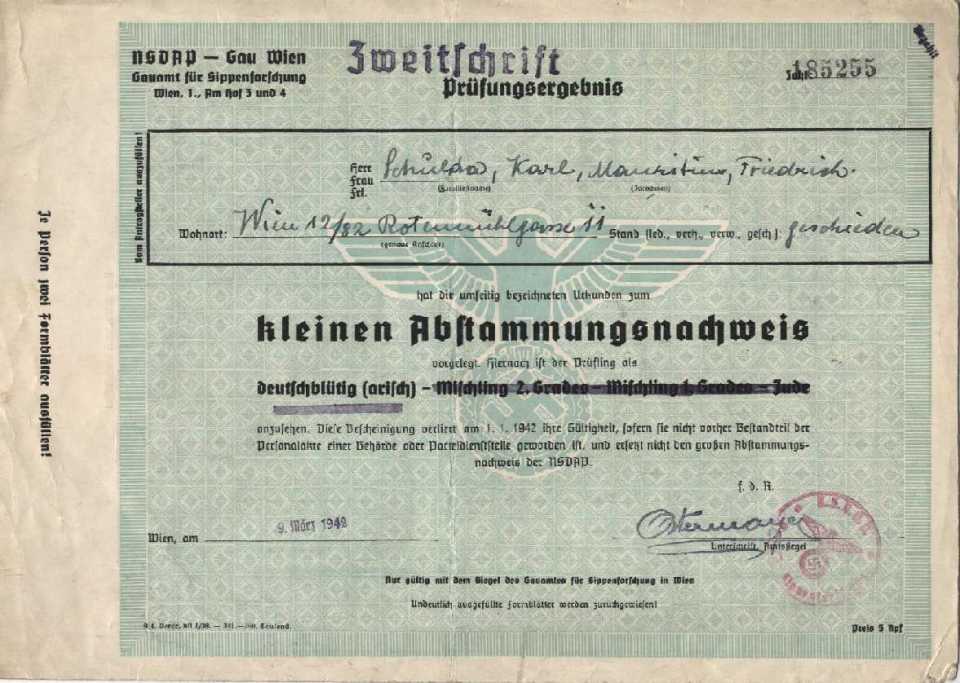 One’s racial classification had enormous consequence: it determined what jobs you could hold, how much food you could eat, and whom you could marry. The details were spelled out in the legal code, which was revised frequently and given wide publicity: 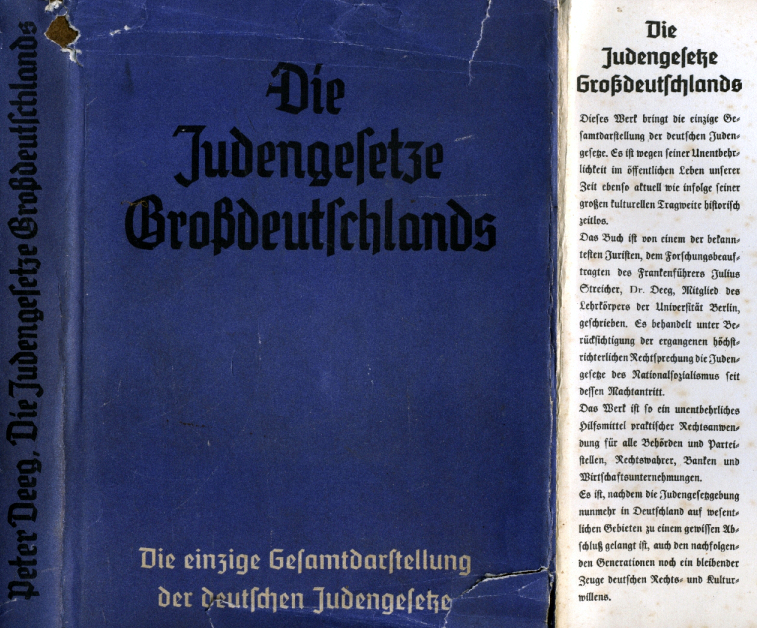 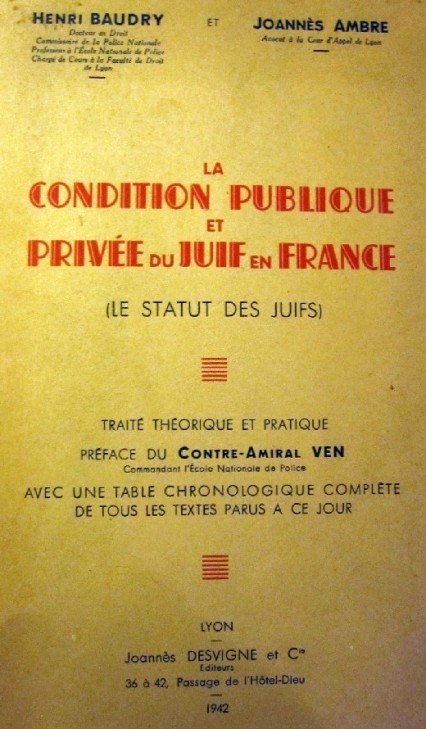 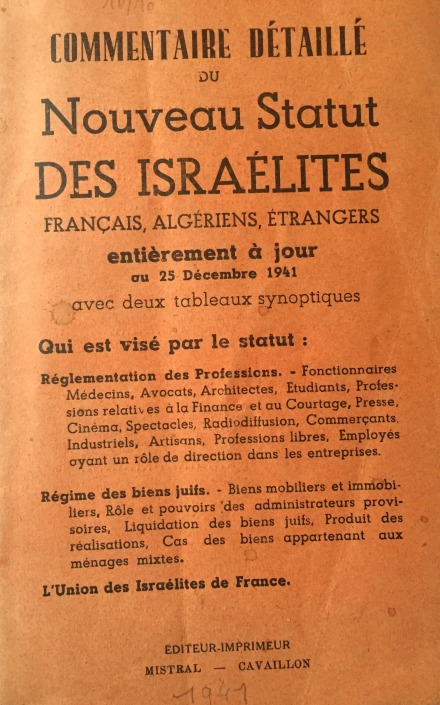 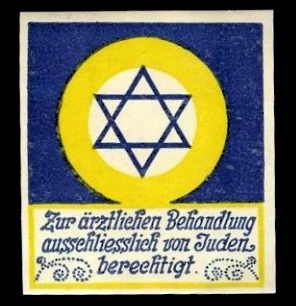 .. Authorized to provide medical care to .. Jews only 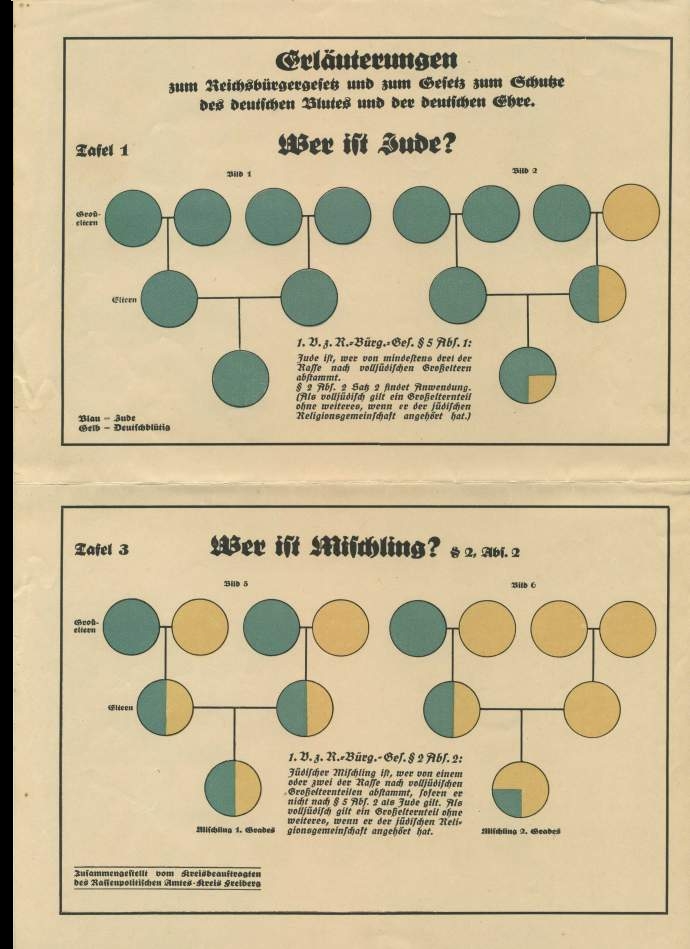 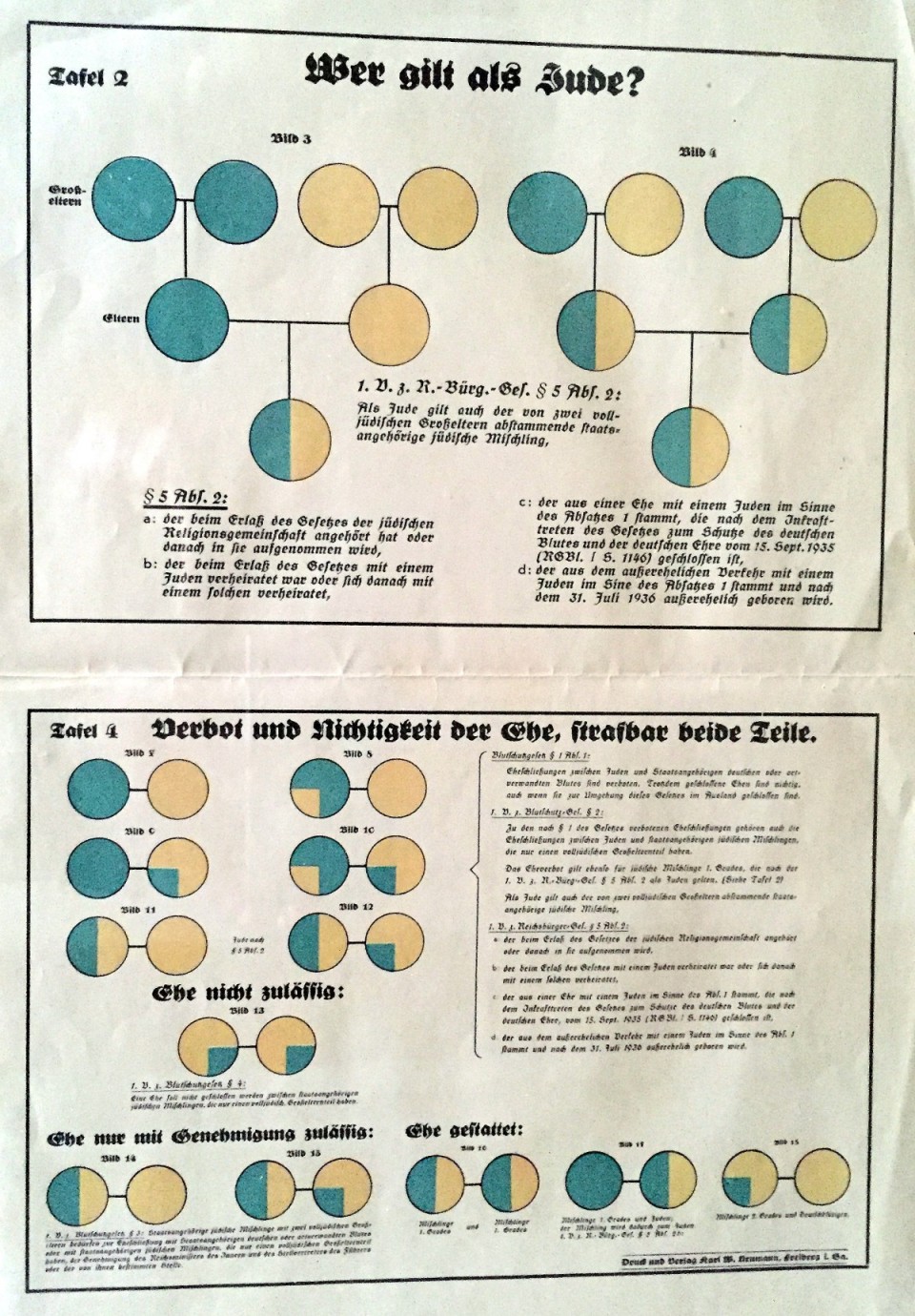 “A child born of a marriage between an Aryan and a full Jew is classified as a Mischling if the marriage existed before 15 September 1935, but as a Jew if the marriage took place after that.” ++ “A Mischling born from prohibited extramarital relations with a Jew and who is born out of wedlock after 31 July 1936, is counted as a Jew.”

Jews may not marry Aryans or 2nd degree Mischlings

The classifications differed slightly in Italy, France, Holland, and the Generalgouvernement (parts of Poland & Ukraine): 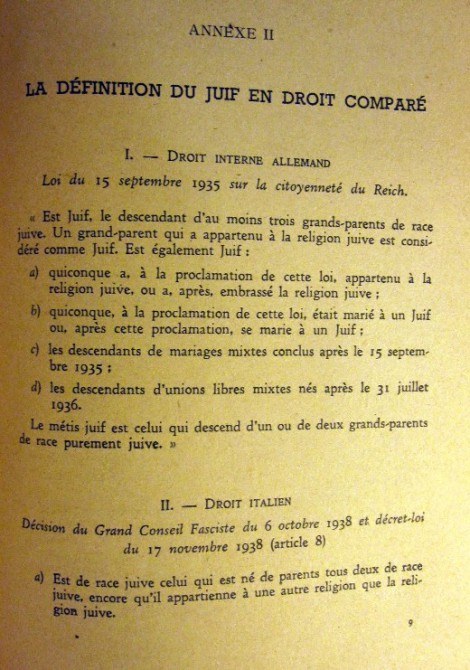 Italian Law: A child of two Jewish parents is Jewish, regardless of which religion he or she belongs to. A child having one Jewish parent is considered Jewish unless both parents are Italian citizens and the child belonged to a non-Jewish religion on 1 October 1938 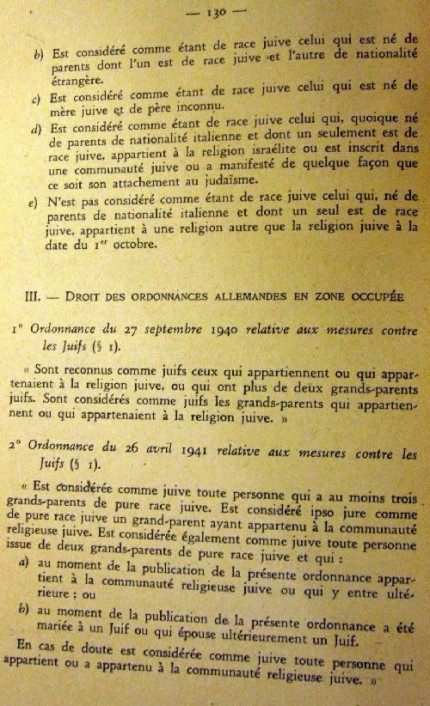 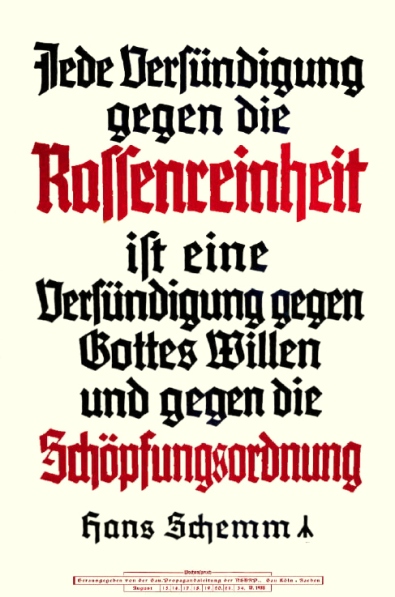 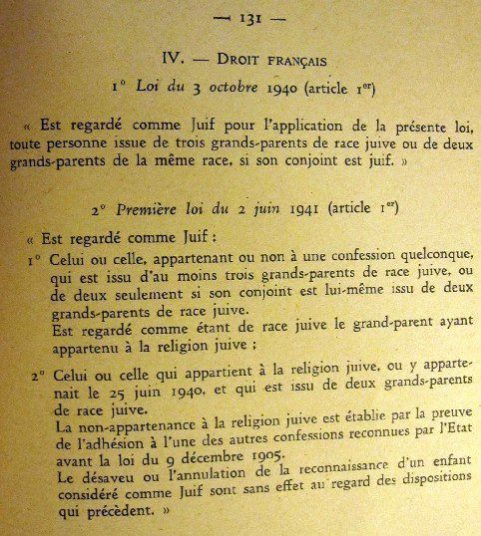 French Law: Anyone having three Jewish grandparents is considered Jewish. A person having two Jewish grandparents is considered Jewish if he or she is married to someone with at least two Jewish grandparents, or belongs to the Jewish religion, or belonged to it on 25 June 1940. +  A person can establish that he or she does not belong to the Jewish religion by proving that they belong to some other religion which was recognized by the State in the law of  9December 1905.  +  The denial or annulment of a child being recognized as Jewish is without effect under the preceding provisions. 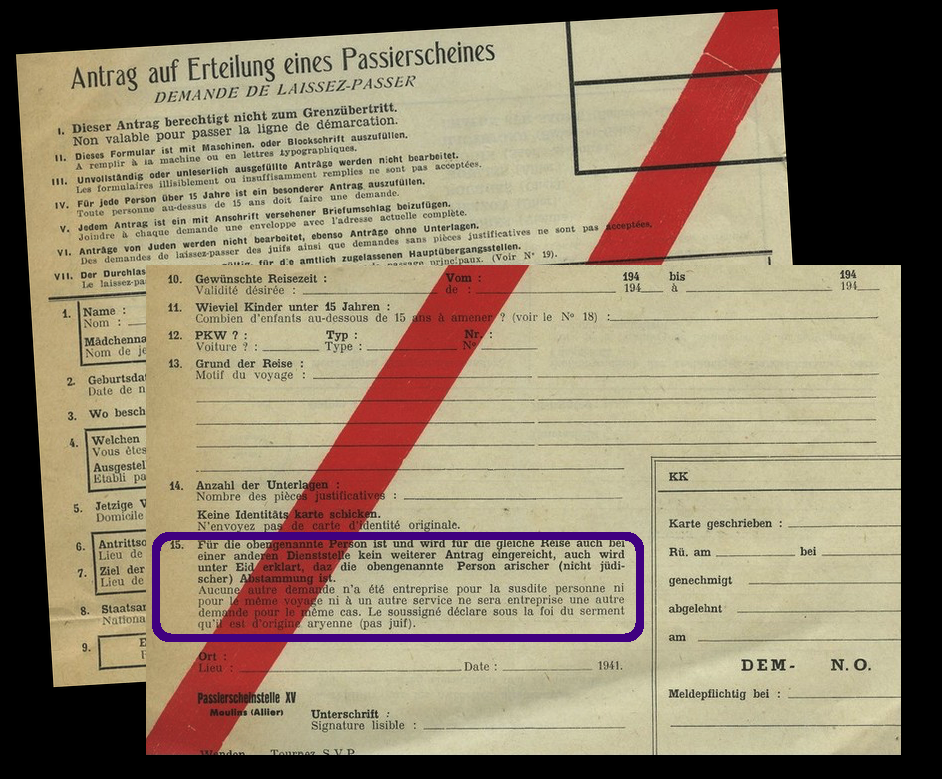 Application for the Issuance of a Travel Pass (Passierscheines, Laissez-Passer)   …15. No other application for the same journey has been or will be submitted to any other department by the above-mentioned person. The undersigned declares under oath that he is of Aryan origin (not Jewish). 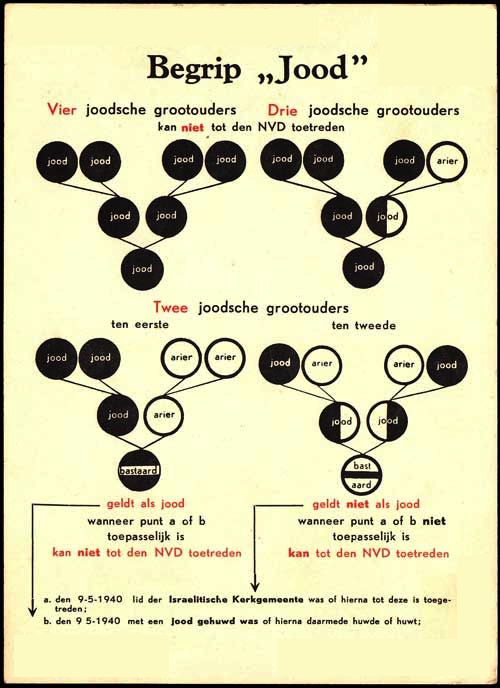 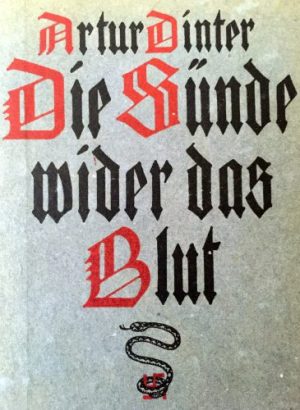 The Sin Against the Blood 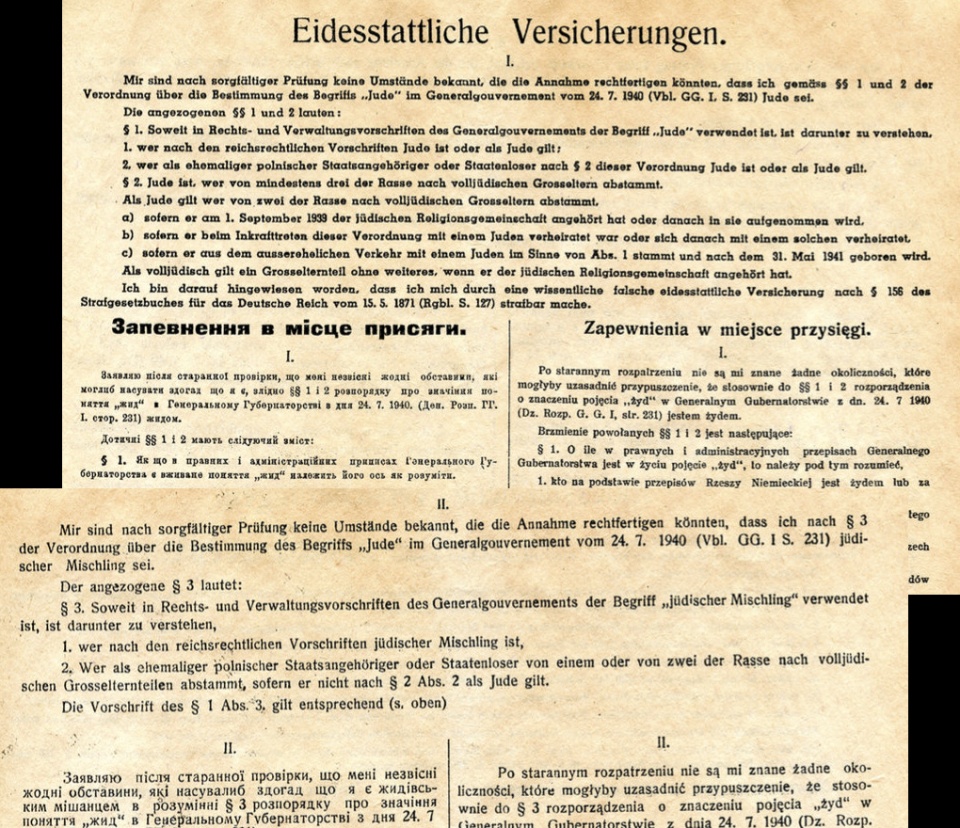 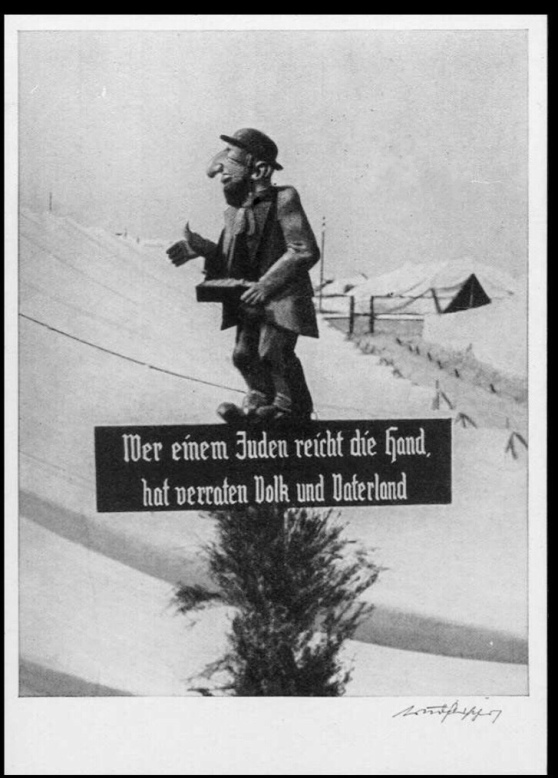 Whoever shakes a Jew’s hand, betrays his People and the Fatherland (postcard 1938)